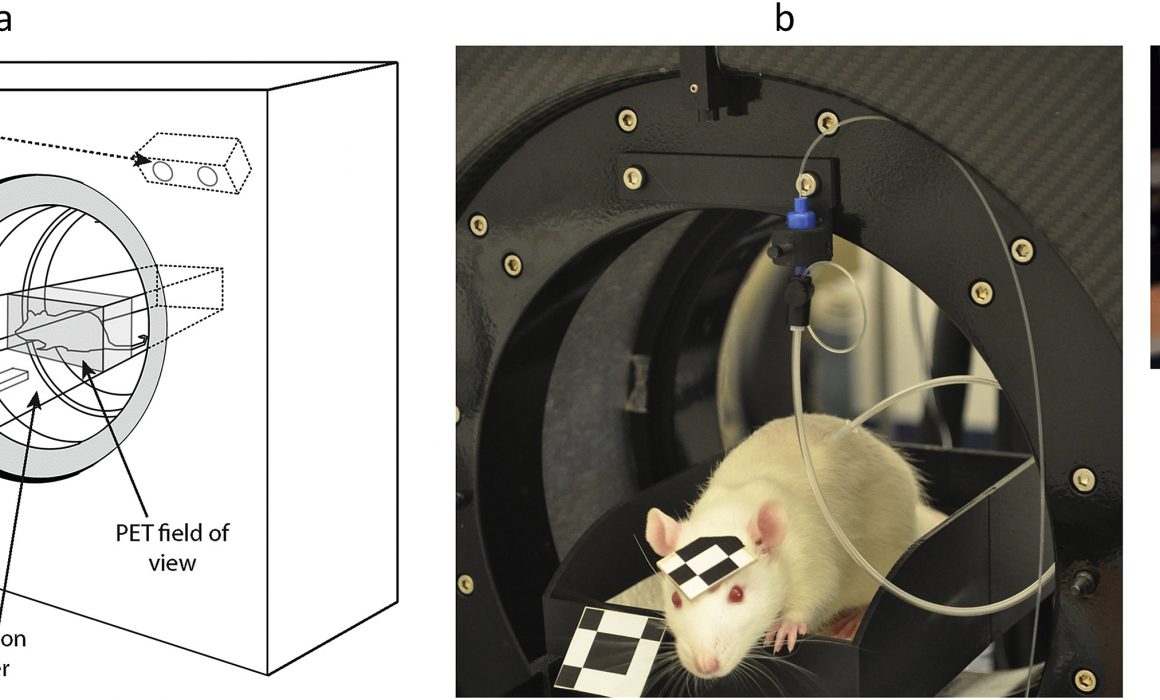 Understanding the molecular mechanisms that regulate behaviour, memory, and reward-based learning has challenged neuroscientists for decades. Until recently, research into these fundamental mechanisms in the brain has relied on invasive or confounding methodologies, limiting studies of neurological disorders that affect behaviour and learning, such as depression, age-related neurodegeneration, and addiction.

Functional imaging methods, such as Positron Emission Tomography (PET) and Magnetic Resonance Imaging (MRI), have been extensively used to non-invasively study brain function. Typically, these techniques require anaesthesia to avoid motion artefacts in the reconstructed 3D images. Anaesthetics can interfere with the neurophysiology of the brain, potentially changing the physiological parameters of interest. Also, they preclude studying the relationship between brain function and behaviour.

Using the imaging facilities and expertise at the NCRIS-enabled University of Sydney/ANSTO NIF Node, a pioneering methodology has been developed to monitor brain activity in rodents using a conventional PET scanner while fully conscious, unrestrained and interacting with the environment.

Despite impressive advances in imaging technologies, our understanding of how the mammalian brain adapts to a changing environment and regulates behaviour remains rudimentary. The ability to observe and analyse animal behaviours during a PET study opens up many possibilities.

The exciting technique, dubbed open-field PET, has been demonstrated in a recent publication by a cross-disciplinary team of researchers at the University of Sydney and the University of New South Wales. In this work, Kyme et al. monitored unrestrained rats’ behavioural responses to environmental cues while acquiring neurochemical changes in their brains using PET. This work builds on earlier studies where animals were awake but confined to a tight-fitting tube to avoid anaesthetic use. As Prof Meikle, senior author in the latest proof-of-concept paper explains, “we realised that if we gave the animal more freedom to move its whole body in any direction, so long as we could still track its head motion continuously and somehow keep the brain in the PET field of view, we would be able to do more powerful ‘open-field’ behavioural experiments during the PET study.”

In this study, the team chose to use amphetamine in their proof-of-concept, a drug that modulates endogenous dopamine release in the brain with a well-understood relationship between dosage and dopamine levels. Dopamine is a key neurotransmitter that modulates behaviour (via specific binding onto D2 and D3 receptors in the brain) and is typically released when the brain receives or expects a reward. During activities associated with pleasure (or even anticipation of pleasure), the brain’s dopamine levels increase.

Using Open-field PET imaging, Dr Angelis and Dr Kyme monitored the time-dependent concentration of a radiotracer that accumulates in the D2/D3-rich areas, 11C-raclopride, and competes with endogenous dopamine for binding to the same brain receptors. Project collaborators Prof Balleine and Dr Hart, of the UNSW Behavioural Neuroscience Laboratory, designed and implemented the animal training protocols in addition to analysing behavioural data. Altogether, Kyme et al. showed a measurable and statistically significant change in regional D2/D3 binding due to the injection of amphetamine. These transient changes in brain function temporally correlated with noticeable differences in observed behaviours such as locomotion, head bobbing, sniffing, and perching. Importantly, injection of saline in place of amphetamine resulted in no changes to brain function or animal behaviour. After successfully measuring changes in dopamine receptor binding concurrently with behavioural responses to amphetamine administration, the team is keen to pursue further applications of the Open-field PET technology—for example, the effects of environmental cues on learning and brain plasticity.

In the long run, we hope such studies will improve our understanding of the biological mechanisms underpinning deficits in learning and motor function that occur in brain disorders, such as dementia and depression.

This story was contributed by the University of Sydney/ANSTO NIF Node. For more information, please contact Dr Georgios Angelis.