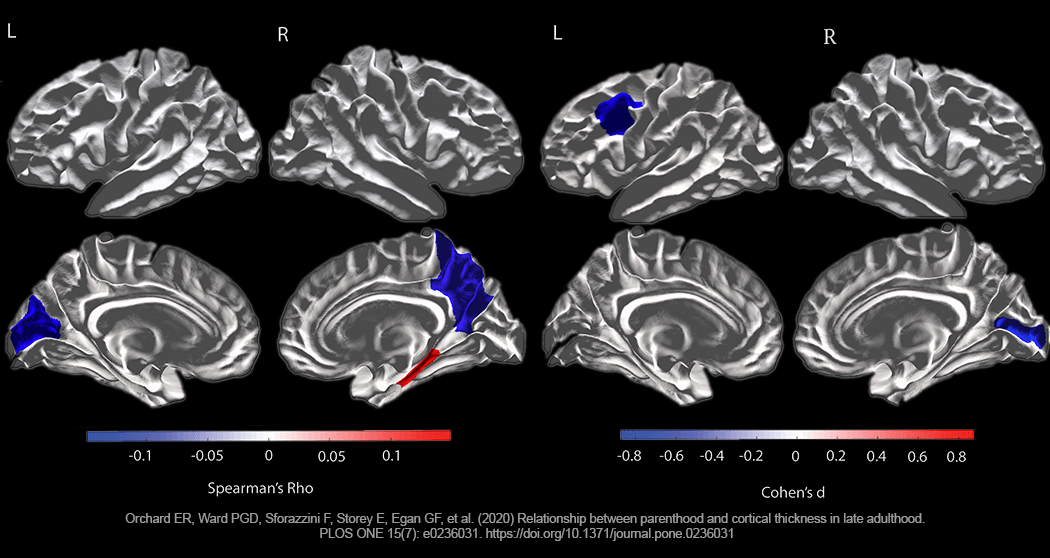 Parents can tell you that having kids changes your life. Recent studies by the Cognitive Neuroimaging Team at Monash Biomedical Imaging have shown just how deep those changes go by analysing brain structure in older adults that have had children. Parenthood was shown to cause life-long changes in both mothers and fathers, with a follow-up study suggesting that motherhood can protect the ageing maternal brain.

Using the NCRIS-enabled facilities and expertise at the Monash NIF Node at Monash Biomedical Imaging (MBI), over 550 participants brains were scanned on a 3T Skyra MRI to determine the effects of 100 mg daily aspirin on the brain. This study, known as the ASPREE-Neuro sub-study, also collected lifestyle information – including how many children participants had.

To investigate this finding further, subsequent data analysis focused on the effects of parenthood on functional connectivity using fMRI. The second study by Orchard et al investigated the function of the maternal brain in women in their 70s and 80s – three or more decades after they became mothers.

We show a consistent pattern across brain structure, function and cognition that suggests motherhood is neuroprotective for the ageing maternal brain. The life-long experience of motherhood provides ongoing environmental complexity and demands, keeping mothers on their toes well into late-life

It is still too soon to say that motherhood is outright beneficial for the ageing human brain, but these findings suggest that the physical and functional reshaping of the brain during motherhood may be beneficial. These neuroprotective effects have been attributed to the complex and dynamic environment of becoming a parent.

Be sure to follow Ms Orchard’s Twitter and Facebook to learn more about her latest research and the research of others in the parental brain field.

Read more about the structural and functional brain changes associated with parenthood: