Magnetic Resonance (MR) opens a window for the non-invasive investigation of MR-observable nuclei, i.e. nuclei with a non-zero spin. Common nuclei in organic substances, like Carbon-12 and Oxygen-16; however, possess a zero-spin consequently rendering Hydrogen-1 (commonly referred as ‘proton‘ due to the single proton in the nucleus) the first and most frequently imaged nuclei.

Despite the much lower signal regime, also the potential of imaging ‘other nuclei’, so-called x-Nuclei MRI was approached in the early years of MRI. In 1985, only a few years after the first proton-based images were published, Sodium-23 was the second nucleus in the human body that was imaged non-invasively using MRI by Hilal and coworkers [1]. In spite of these early beginnings, x-Nuclei imaging in general and Sodium MRI, in particular, did not see the same high-paced progression as proton-based MRI techniques. This downturn was mostly caused by significant SNR limitations resulting from the low in vivo concentration and complicated NMR-signal characteristics of Sodium nuclei.

While SNR issues are more and more overcome through hardware improvements, particularly the recent advent of high field systems, the challenging signal characteristics continue to encourage the development of dedicated acquisition methods. Sodium possesses a 3/2-spin and as such exhibits a fast bi-exponential signal decay. Consequently, Sodium MRI sequences are commonly performed in 3D with k-space sampled via centre-out trajectory schemes resulting in inherent drawbacks for sampling efficiency and SNR. While previous research in Sodium MRI method development focused on the optimisation of sampling trajectories, we present a new acquisition method that tackles Sodium image quality improvements via a sequence timing optimisation.

Recently, we introduced zero-gradient excitation ramped hybrid encoding (zGRF-RHE) Sodium MRI, a timing optimisation that utilises the sequence dead-time delay (time-gap between transmit and receive mode) for gradient pre-ramping. This concept improves encoding time across k-space and in so doing alleviates signal decay effects during the acquisition. It utilises a hybrid sequence encoding approach where the central k-space gap, resulting from gradient activity before receiver onset, is filled with Cartesian single point acquisitions. A sequence diagram of zGRF-RHE is displayed in Figure 1.

Hybrid imaging techniques, like PETRA or its generalised concept RHE, are frequently used in short-T2 proton imaging. Their application to low SNR problems like Sodium was, however, hampered by the employed gradient modulation during signal excitation. In that regard, we establish zero-gradient excitation for an artefact-free excitation profile maximizing image quality. The gradient-free excitation supports high flip angle acquisition, an essential requirement for low SNR imaging like Sodium, but also provides the opportunity to employ advanced RF pulse shapes without introducing a gradient-based excitation bias. Additionally, it should be highlighted that the zGRF-RHE sequence approach essentially describes a timing concept that is not just independent of the RF-excitation but also is not restricted to a particular readout-scheme. 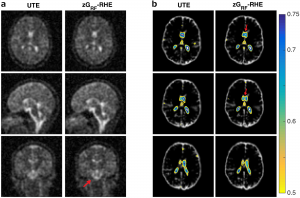 In summary, this work introduces an enhanced sequence timing concept with particular applicability to challenging low SNR-problems. Ultimately, this approach is expected to be of use for a wider range of x-Nuclei applications with spin > ½.

For further information, the interested reader is pointed to our full publication which can be accessed at https://onlinelibrary.wiley.com/doi/abs/10.1002/mrm.27484.

This story was contributed by Yasmin Blunck of the Melbourne Brain Centre Imaging Unit and Department of Biomedical Engineering, University of Melbourne, Parkville

Australia is at the forefront of dementia research with world leading studies such as the Australian Imaging and Lifestyle study of Ageing (AIBL) led by a consortium of Australia’s leading Dementia centres, and the recently started Prospective Study of Ageing (PISA) led by the QIMR Berghofer.

The installation of the first human ultra-high field MRI scanner in the southern hemisphere at the Centre for Advance Imaging, the Qld node of the National Imaging Facility, in 2014 opened up a new era of imaging research. The Siemens 7T whole-body MRI scanner brought Australia to the forefront of ultra-high field research enabling examination of the human brain with an unprecedented level of detail.

Subsequently, a second 7T scanner was installed at the Melbourne Brain Centre providing a unique opportunity for a national multi-centre collaboration in ultra-high field MRI and the capability to explore new imaging biomarkers for diagnosis of neurodegenerative disease. A major project is underway, led by the Brisbane-based CSIRO eHealth Research Centre, co-funded by the CRC for Mental Health and in collaboration with the QIMR Berghofer, University of Melbourne and Florey Institute for Neuroscience with the broad aim of characterising new bioimaging biomarkers of neurodegeneration in the aging population. A suite of MRI methods is being applied at both sites on large cohorts of healthy aging subjects and patients diagnosed with fronto-temporal dementia. The scanning part of the project has been successfully completed with superb image quality obtained using state of the art sequences. A significant effort is now underway to analyse this valuable data which may contain a wealth of diagnostic information not otherwise available.

This story was contributed by The University of Queensland 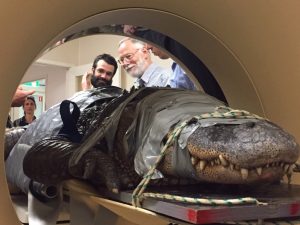 The Large Animal Research and Imaging Facility had an unusual visitor. George the Alligator from the Adelaide Zoo came by for a temporal mandibular joint and dental check-up, courtesy of our 16 slice Phillips CT scanner.

It had been recognised over the past two years that George did not open his mouth wide or quickly, and instead took food gently and played with it before swallowing it slowly in a most unlikely Alligator way. The differential diagnosis most likely was temporomandibular joint (TMJ) pathology which may have been able to be diagnosed/described by a CT scan. George was physically restrained, and his mouth secured (the muscles to open the mouth are quite weak, fortunately) and his 180kg body carried by 6 staff and placed into the NIF funded 16 slice CT scanner. Then the Alligator was scanned prone in a 16-slice Philips CT scanner using a 3D protocol (KV/mA: 120/350; field of view: 350 mm; matrix: 256×256; thickness/overlap: 1 mm/0.5 mm). The CT protocol was designed to give good high-resolution data, optimal contrast and good signal-to-noise ratios. Unfortunately, whilst good quality images were taken of the TMJ and adjoining tissue, no obvious abnormality was detected. Normally treatment with a non-steroidal anti-inflammatory drug (NSAIDs) would be employed to help with a diagnosis and potential efficacious treatment, it has been decided that the downside of the use of NSAIDs in a slow metabolising reptile was not outweighed by the clinical difficulty the ‘jaw opening problem’. George is not losing weight, is an old Alligator, so careful observation of his wellbeing will be undertaken over the next 6 months to ensure that his welfare is not adversely affected. 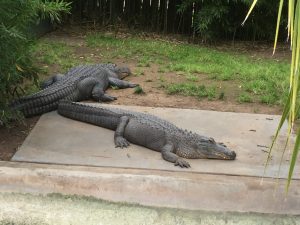 George, on the left, next to his girlfriend, after coming home from LARIF

This story was contributed by LARIF and the Adelaide Zoo