Targeted or “smart” biological compounds are a rapidly expanding field for the next generation of drugs for disease treatment and enhancing plant and animal production. Traditional methods, such as MRI and PET, measure the uptake of an agent with a single label via a single imaging modality, these results include a combinations of the delivery (flow, perfusion etc) and metabolic activity (binding potential, cellular transport, metabolic kinetics etc). These two components are not easily separated. In contrast, simultaneous imaging, using modality specific compounds with Positron Emission Tomography (PET) and Magnetic Resonance Imaging (MRI), has the ability to determine metabolic activity, independent of delivery. This is essential for the field of targeted diagnostic and therapeutic agents. For human use, “theranostic” agents, combining therapeutic and diagnostic potential, has a huge potential for personalised medicine and is a rapidly growing industry in Australia and Internationally. The development of protocols to simultaneously performing PET and MRI assessments will give a competitive edge to Australian researchers and industries for development of these compounds and early phase preclinical trial of novel drugs.

Hosted by the Centre for Advanced Imaging at the University of Queensland node, the world’s first Bruker ClinScan MR/PET scanner is a flagship technology for the NIF-UQ node. NIF Facility Fellows have collaborated closely with scientists from Bruker and University of Tubingen, Germany, in optimising the best features of both MR and PET imaging technologies.
Development of the tools for simultaneous dynamic assessment of PET and MRI contrast agents commenced with the two most commonly used contrast agents for PET and MRI, F18-fluorodeoxyglucose (FDG) and complexes of Gadolinium (Gd), respectively. FDG, an analogue of glucose, is the most commonly available PET agent, used primarily for oncology, as a marker for increased tissue metabolism. FDG is transported into cells via normal glucose transporters, where it is trapped since it cannot be metabolised along the entire length of the glycolytic pathway. Therefore, increase in signal intensity of FDG results from a combination of tracer within the vascular bed and glucose transported into the cells.  MRI Gd contrast agents are used for MR angiography and to measure tissue perfusion, and vascular integrity. The Gd agents are designed to remain in the vascular system and not cross into cells. The real-time measurement of the delivery of the Gd contrasts agents is called Dynamic Contrast Enhanced Magnetic Resonance Imaging (DCE-MRI). Simultaneous dynamic measurement of the uptake of gadolinium (Gd) MRI perfusion agents and the glucose PET analogue 18F fluorodeoxyglucose (18-FDG) enables independent assessment of tissue delivery and cellular transport of FDG.

An anaesthesised mouse was placed in a combined MRI/PET system, comprising a 300mm bore 7T ClinScan, running Siemens VB17, and removable PET insert containing 3 rings of 16 detector blocks with 15×15 LSO crystals (1.6×1.6x10mm) per block1, at the centre of the magnet bore operating under Siemens Inveon Acquisition Workplace (IAW) (Bruker, Germany). An 86 mm ID rat body MRI rf coil centred inside the PET ring was used to acquire whole mouse images simultaneously with the PET acquisition. Following MR localiser images, two coronal gradient echo image slices were positioned to include the brain and kidney in one slice and the heart, liver and bladder in a second slice with the following parameters: temporal resolution of 1.3 sec, TR=20 msec, TE=3.5msec, FOV =80×45 mm, 25° pulse angle, resolution 0.625×0.625×1.4mm with 512 measures acquired over 10 min. A 30 min dynamic PET acquisition was started simultaneously with the dynamic MR. Following baseline scanning of ~30 sec, a single injection containing Gadolinium (Gadovist, 52 µl ) and 18-FDG (5.8MBq) was administered in a total volume of 104 µl via a cannula inserted into the tail vein. PET images were reconstructed with OSEM2D in IAW. The reconstruction time frames were 10 sec during the first 5 min, and 60 sec thereafter. 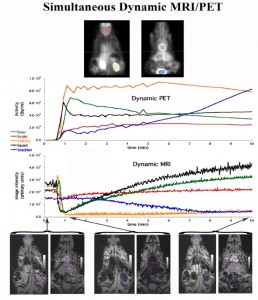 Simultaneous dynamic uptake was measured in the brain, heart, liver, kidney and bladder for 18-FDG PET and Gd-MRI (Figure 1). Delivery and uptake of FDG was monitored as the increase in PET activity in the organs. Vascular delivery of high concentrations of Gd is characterised by a decrease in MRI signal intensity. Low concentrations of Gd enhance MRI signal intensity as exemplified by initial enhancement in the liver and late myocardial enhancement.

The developed methods for simultaneous FDG-PET and DCE-MRI assessment, will enable differentiation of the relative contribution of changes in cellular transport of glucose and/or delivery of FDG when altered FDG signal is measured. These methods will then be able to be applied to novel biologically active agents.